Transporting heavy things on a wheelbarrow used to be tedious work before the electric wheelbarrow came into the picture.

However, the market is flooded with all kinds of powered wheelbarrows all of which are marketed as the best. Meaning that finding a well-powered wheelbarrow is easier said than done. Nonetheless, there is no need to worry, as I am sure there are several wheelbarrows guaranteed to tickle your fancy.

To be more specific, I have selected three powered wheelbarrows that I believe are worth a try.

Top on the list is PAW’s 24-volt wheelbarrow. As its name suggests, this wheelbarrow is powered by a powerful 24-volt battery.

The load is held within a 6.0 cubic poly tub frame built from rugged steel. The frame sits on two 13 inch tires. The dimensions of this wheelbarrow are; 57 inches in length, 28 inches in width and 27 inches in height.

Capable of carrying loads of up to 200 pounds, the wheelbarrow is equipped with a 24 v battery. And similar to the previously reviewed PAW battery powered wheelbarrow, this one also has a two-wheel drive system.

A 6.0 cubic feet poly try accommodates your load. In regards to dimensions, this wheelbarrow measures 57 inches in length, 28 inches in width and 27 inches in height.

Another electric powered wheelbarrow from PAW that makes hauling easy is the electric battery power wheelbarrow. Unlike the other two reviewed above, this wheelbarrow has an impressive hauling capacity of 300 pounds.

A 24-volt rechargeable battery powers the wheelbarrow and can last for up to one day of standard use. Thus, you can go for up to 12 hours of use without having to recharge the battery. 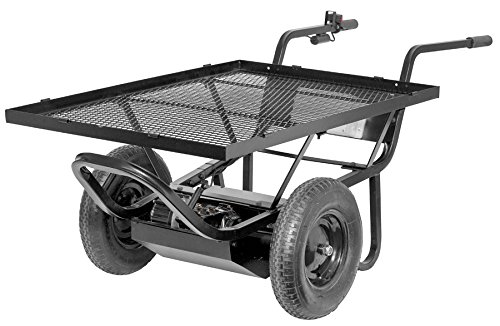 Things to consider before buying an electric wheelbarrow

The electric wheelbarrow is designed to make work easier for you. Therefore, when buying an electric powered/motorized wheelbarrow, it is important to consider its capacity.

If you have a lot of things to move then a wheelbarrow with a big capacity will do. However, if you transport small loads in your farm or backyard I recommend going for one with a small capacity of about 200 pounds.

In some respect, you can also you haul large item easily by this electric wheelbarrow. Check this video here .

Probably the most important component of a motorized wheelbarrow is the battery. Therefore, the battery of the electric wheelbarrow you plan on buying should be powerful.

The battery should correspond with the task you have. Also, a powerful battery will keep your wheelbarrow running for longer saving you time and money. Thus, it is important to consider the power of the battery of the wheelbarrow you are thinking of buying.

Since you will be using your wheelbarrow outside it is important that it be rugged enough to withstand harsh weather. In light of this, I recommend settling on a wheelbarrow with a steel frame.

Steel is a tough material that lasts long. In essence, it is important to check how well a wheelbarrow is constructed before buying. The best electric wheelbarrows will be fitted with a protective cover over the motor. This cover protects the motor from harsh weather conditions and keeps it running for longer.

Apart from a motor protective cover, it is also important to consider the kind of gear that is used in a wheelbarrow. A two-wheel independent gear system will be maneuverable and will be easy to turn.

The carrying tray is where you place the load you wish to transport. Being that this is the part that makes it possible for you to transport things, it should be of high quality. The depth of the tray is an important factor to consider. Also, important is the material used to make the tray.

Similar to the frame, steel is the best material used in the making of the tray. Due to its toughness steel is able to withstand loads of different weights and texture without breaking. Thus, the carrying tray is an important component to consider.